COMMUTING | It's More Fun In The Philippines

Cab drivers in the US or in any other countries would ask you where you're going and then take you there if you have the money to pay for the fare.

Cab drivers here in the Philippines would ask you where you're going and will only take you there if they're headed that way too or if you're going to pay them extra.

That humorous analogy was not actually a joke but an illustration of one of the most known Filipino street culture. Did you know that there are many surprisingly intriguing things about the Pinoy commuting public and their day to day experiences in the street?

I belong to the millions of Filipinos who have no other choice but to look forward to commuting every single day of their lives. 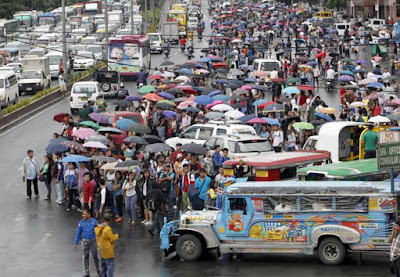 Who would not be enticed by the fragrance of carbon monoxides and dangerous fumes emitted by vehicles 24/7. Who would exchange the negative feelings generated from a rush hour traffic on all the major thoroughfare in Metro Manila. Who would not miss the pushing, and the sweaty and smelly co-commuters inside the over crowded buses and trains of LRT and MRT.

Seriously though, (so long as there are no unreasonable traffic jams and heavy downpours) I would prefer to commute and use public transportation to get to where I'm going.

I love to travel. For me, it is a very relaxing and mind-enriching activity 'cause I love to observe things. This is one reason why I seldom sleep while travelling.

Commuting refers to people travelling, usually daily, to work places beyond their own town, cities or villages.

Here in the Philippines, If you are a commuter - it would generally mean that you don't have a car and that you are using some form of public utility vehicles such as jeepneys, tricycles, pedicabs, buses, trolleys and trains to get to where you want to go.

Commuting here in the Philippines, has evolved also into a branding mechanism for those who have and those who don't have. The rich and the poor. The upper class and the middle and lower class citizens.

Whether we like it or not, cars have become, not only a mode of transportation but also a status symbol for the rich. That's why when the recent oil price hikes occurred, it somehow evens-out a little the margin that separate the classes. Cheaper cars were introduced, new lower rates were implemented and car dealers are now reaching out even to the lower middle class just to get a sale.

Hoorray for the consumers but very bad for the over-all Metro traffic situation! The volumes of vehicles out on the streets are just too much for NCR roads to accommodate.

JEEPNEYS
I have been riding jeepneys all my life. I remember Jeepneys were so much smaller back in my Elementary days. I remember Sarao introducing the new bigger and sturdier models of jeepneys and now we can see Jeepneys the size of buses and Jeepneys with air conditioning.

The Jeepney is also considered as a Filipino National Symbol. (However, this contraption was introduced to us by the Americans during World War II)

They say, that a Jeepney reflects the Filipino culture. 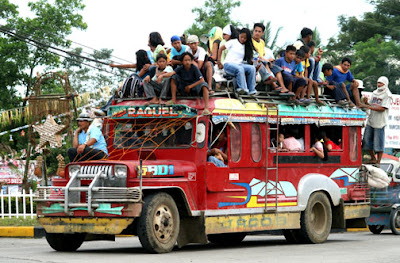 When you say PUJ... that is synonymous to the Philippines. So, let's see what it says about the Pinoys today.

Lastly, let me compare the pinoy with our PNR trains which runs from Manila to Alabang and sometimes as far as Laguna. It also has a long distance commercial train that can go up to Legaspi in the Bicol region.

It's under intense rehabilitation with the goal of being restored to its original glory. There are a lot to be done. Most of the trains are dysfunctional. Cleaning (inside and out) would take years and a lot of dedication. 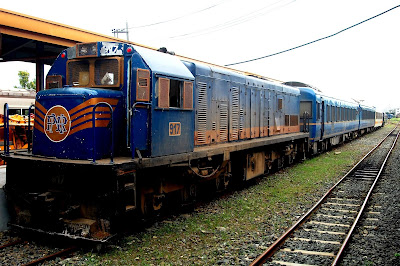 I took a ride once in one of their trains. The train was completely a mess and the sight outside the train is anything but admirable. But while I was riding on that train I felt a real sense of nostalgia. It is as if I was riding on a piece of Philippine history, which I was.

So if the feeling is there, then, there must be some kind of hope into its restoration initiative.

The train, dysfunctional and rejected, still stands resilient. Like Pinoys are I guess.

And then I learned after alighting that I have lost my mobile phone while another fellow passenger lost his wallet.  With no security personnel to call and assist us with our predicament, we just left the station abandoning all hope.
Thoughts