So I just recently watched two, months-old sequel films here in Manila - Now You See Me 2 and Teenage Mutant Ninja Turtles: Out of the Shadow.

To give you a little background, I am a big fan of the first "Now You See Me" film which was shown in 2013 but I didn't like the 2014 Michael Bay produced reboot of "Teenage Mutant Ninja Turtles."

After watching the sequels, I guess the tide has changed - I am now impressed with TMNT Out of the Shadows and a little bit disappointed with Now You See Me 2.

Most of the cast of the two films have reprise their roles in the sequels, they also have the same set of writers. And so I am assuming that the most critical changes were brought by their new directors. 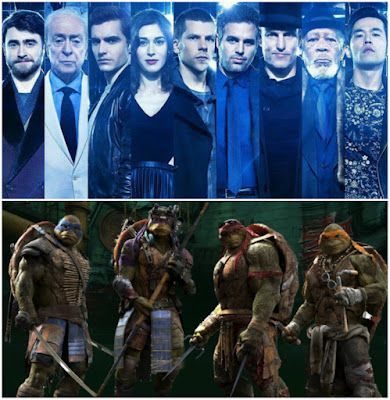 For a show about magic and the best magicians in the world, Now You See Me 2 lost some of the first film's 'magic'. It lacks the thrill and awe that we have experienced during the first one. I guess I was expecting to see more spectacular and mind boggling illusions instead of hearing about conspiracies and other boring revelations.

I was actually dreaming of a Now You See Me wizards' showdown. A Jesse Eisenberg-Daniel Radcliffe magic battle would be nice! But instead we got a lousy version of Oceans 11.

Now "Teenage Mutant Ninja Turtles: Out of the Shadows" actually redeemed the first movie. I love that they didn't focused much on 'origin' stories again just like what they did on the first one which totally messed-up the 90s version.

The new film has more turtle action, less drama and even more humor. "Turtle Power" was born and so is the character of the vigilante Casey Jones (Stephen Amell).

The evil alien Krang and mutants BeBop and RockSteady was portrayed awesomely. I think transforming a human Bebop and Rocksteady to animal mutant villains are more believable, so deviating from their origin story was really a necessary act.

The Now You See Me plot has a lot of potentials to turn it into an epic movie, I hope the writers will be able to see that and make it right.  Teenage Mutant Ninja Turtles has already made its marked in cinematic history, making it more entertainingly appealing to today's audiences will be the producer's greatest challenge.
Posted by Rain at October 06, 2016