Kids Drag Old Man Out of Jeepney in Manila - What's The Real Story?

September 16, 2018
THERE'S this story (and video) that went viral a couple of days ago but I think there's more to it than what it appears to be.

And I've seen posts condemning these kids like they were criminals which in my opinion is NOT CORRECT. 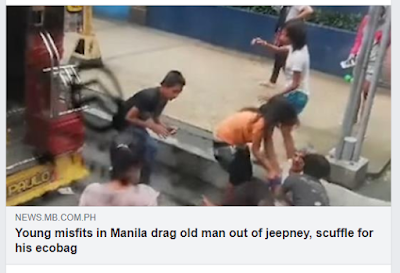 They need to be rehabilitated and put in an environment where they are loved, cared for and formed to become responsible citizens of this country. They are not garbage, they're human beings who never had those basic rights!

Let's put aside emotions and examine the video more closely:

Walang tsinelas si manong so he looks like a street dweller as well and the street kids all knew him because there are other passengers inside but he was singled out.

Plus the target was that thing the old man was holding. Maybe it's food or money, we may not know.

I didn't see any physical attempt to hurt the man. They were after that bag, the Manong didn't let go.

So there's a story behind this we don't know about. Most of the time, things posted on social media are just the TIP of the iceberg. WAG po tayo masyadong TRIGGER-HAPPY and like what a friend once told me - unless you know the REAL or WHOLE STORY never ever make your judgment especially when lives are at stake.