I am now starting book two of my script "Hating-Gabi."

Book one is sub-titled as "Ang Pagtitipon" and book two will have the sub-title "Ang Alamat ng Pitong Agimat."

The very first thing that a writer sees before writing is a blank page. And sometimes this blank page can stay as a blank page for days, weeks and even months or years. We'll call that phenomenon as "writer's block". That's the reason why I'm here right now 'cause I have switched to another blank page. However, this blank page doesn't have the same curse as that other page.

Staring at that blank page earlier, I can't help but remember the movie "Kung Fu Panda" which stars the voice of Jack Black. I like Jack Black, specially in "Nacho Libre." I first saw black in a small role in the 90's with David Duchovny (who's been in rehab for being a sex addict) and Gillian in the successful sci-fi TV series 'X-Files.' 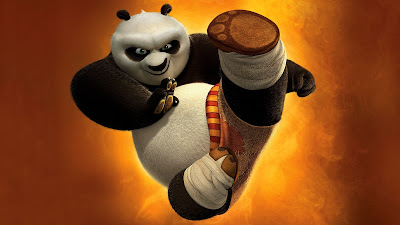 In one of the scenes, Po finally got the chance to take a look at the legendary dragon scroll which was thought to possess great truth and power that only the 'dragon warrior' is righteous enough to possess. As Po opened the scroll all that he saw was.. (guess what) - a shiny golden blank page.

He trained so hard to have the right to possess the scroll and what he got was just a shiny blank page.

The blank shiny page of the scroll reflects the face of Po. Because there is no secret ingredient - there is just you. And you just have to believe in yourself.

Staring at that blank page earlier made me stop and take a backseat in my life. To pause and reflect on everything that has happened in my life. My triumphs and my frustrations.

I fear the future. I did not believe.

What we believe we become - I have been teaching this to kids in seminars and now I'm embarrassed to say that I have not become a disciple of my own teaching.

I am going to take a look at my dragon scroll every day of my entire life and keep looking because there is no secret ingredient, no special magic power. - It's just me, my dreams and my belief. I am going to make it right.