An Apocalypse of Our Own Doing 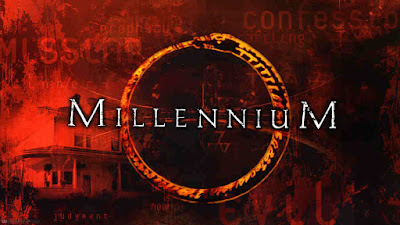 I am now down to the final episodes and in an episode that I was watching last night, Frank Black (Lance) received an internet virus through a video game warning him about an impending danger and the message was:
The Apocalypse of Our Own Creation

I was fixated with the message and actually re-winded that scene a couple of times before finishing the whole episode.
The Apocalypse of Our Own Creation

Apocalypse is a Greek word for "revelation." It is a term used to mean a form of disclosure to special privileged people of something that is perpetually hidden from the rest of the world.

In today's language - the end of the world (Apokalupsis Eschaton).

In the Christian point of view, an apocalypse is described as a God-to-Prophet thing. It's a special part of the relationship between the divine and the messenger and the result being is a divine message.
Whether it be about the future, the present or the past.

But in the series, it was clearly mentioned
Apocalypse OF OUR OWN CREATION

A revelation that we ourselves made?

An end that we ourselves designed?

And there maybe some truths about that statement. From the pages of mankind's history book we saw the Atomic Bomb, Incidents of Genocide, HIV outbreak, the Chernobyl Nuclear Accident, GLOBAL WARMING... just to name a few.
We can actually level it down to smaller events that happened in our own backyard like Landslides due to indiscriminate mining, Flash Floods due to deforestation, Growing National Debt due to Government Spending and Graft and Corruption, and so on and so forth. The future is very much predictable right now.
The Apocalypse of our own creation

If we can create our own apocalypse - then, it is also true to say that we can design a better revelation.

The future is very much predictable right now but... the future isn't written yet.

We can write a better one starting today by taking charge of our own future and by doing something about it.

Oppose indiscriminate mining, plant more trees, expose and jail the corrupt and do whatever we can to make this world more just and fair to all its inhabitants.

WHAT WILL BE OUR APOCALYPSE TODAY?
Posted by Rain at September 11, 2009