I would just like to say that I am the extremely proud parent of two very wonderful kids, and seeing them grow to become responsible and kindhearted young adults makes me so happy... and old.

I would suggest for them to 'not grow old so fast' but we all know that's not up to them, or us.

It's the law of the universe - people and all living things grow and change. And CHANGE is the only constant thing in this world - that's why I'd like to inform those people who used the slogan "Change Is Coming" in the last election that it's wrong because "Change is Always Happening" whether you shout that from the top of your lungs or not.

Now, the kind of change that happens is determined by the events or situations from which it was created. We can will for the change that we want but sometimes it just take its own course. 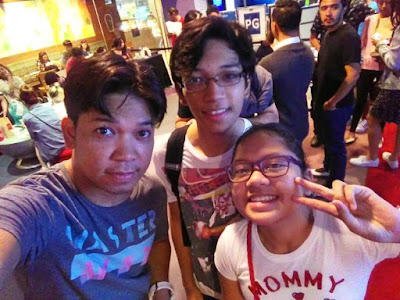 Anyway, I'd just like to share that my 12 year old daughter just got her period the other day.

I was actually worried because she was absent for two days in school and kept on complaining about a persistent headache and abdominal pains. We were going to bring her to the clinic but our family doctor was out on a seminar. So bummer.

And then it happened.

So I called her mom and asked her what to do because 'haleer' I have never experienced that and don't actually know the ABCs on that subject.

What this all means is that, as a father, I am gonna do a little bit more 'hawk-eyeing' on her friends! Boys will need to go over the Hulk first before they can talk to my daughter! It's gonna be a Hulk Smash moment for the poor kid that tries!

He was a victim of bullying in school which really affected his self-esteem. He actually skipped a school year because of that incident.

That's one of the reason why I am really advocating for various anti-bullying campaigns.  But it's a complex matter since there are many forms of bullying and a lot of factors why it is happening. Reasons may be rooted to clinical, psychological or experiential but whatever the case may be, it must be stopped and the correct way of dealing with the problem is not to eliminate the bullies (the DU30 way of doing things - I suppose) but to address the issues on a case-to-case basis - find out what the cause is and treat the root of the problem.

When you see bullying as a sickness and the bully as a victim of this disease - you can always find a win-win solution to it. Treat the problem and not the person. (and that goes with other social issues like drugs, alcoholism, etc.)

Getting rid of a complex problem takes more than just simply getting rid of the symptoms. It's always going to grow back because the root of the problem is still there - just like a fungus. So there.

But going back to my son, growing-up was very difficult for him (and for us) because he was somewhat emotionally incapacitated because of that, but seeing him right now makes me want to cry tears of joy.

During his last year in Junior High, we were able to actually see him on stage performing long lines confidently for a school stage play. A side of him that we thought we'd never ever see.

And then just last week he's on the stage again together with his classmates for a school presentation - he's in Grade 11 now studying at St. Paul University Manila.
In Pokemon Go lingo, I think I have already earned enough Sky Candies and Neo Candies to bring them to their second stage of evolution. I wonder who will they become in their next stage - and I hope that I will still be here to see it when that happens. :)