I wonder how Robin Padilla got his big break in show business?

Actually, I really don't understand the concept of a "Big Break" maybe it's because I don't feel like anything like that has ever happened to me before.

Someone told me that "Luck is the event of being ready for an opportunity when it happens."

So, luck may also be called as a "Big Break"

And when you missed out on that "Big Break" that may be attributed to being "Unlucky" or having a "Bad Luck" or any other extreme phrases you can think of to express disappointments.

Well, if that's the case then I think I've had my share of "Big Breaks" as well in the past. 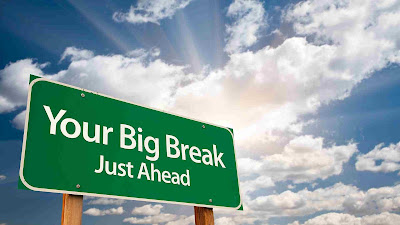 Sadly, 'Big Breaks' are not meant to last. They're one shot deals that disappears when taken for granted or when not fully realized (understood or accepted).

So maybe, it was really entirely my fault that my "Big Breaks" didn't last that long.

Let me cite some instances.

Two years of investing and putting into trial a lot of systems to find out what works and what didn't.. and after finally setting up a good system and was about to reap the rewards of all my hard work somebody shows up, inexperienced and incompetent and with all the wrong motives, snatches up your two years work and networks.

This person was the anointed one.. the one baptized in a river and to whom the boss' finds favor (if you get my drift).

The opportunity here is to kiss the buts of the bosses and you get to stay in your place. BUT I am never that good at kissing buts - I am however good at kicking them.

To make the story short - I kicked buts and I got sacked. :)

Not very good playing with incompetent people, it usually makes my stomach sick.

If I did, I might still be there reaping. So... it was really my fault.

This incident happened to me twice.. my reaction was the same and I got the same result.

There must be something wrong with me! hehehe.

I will never understand the concept of a "Big Break" entirely but maybe I'll just have to hope that I will still get mine, someday.
Thoughts