THE FALL OF THE SORCERER'S APPRENTICE

July 24, 2010
July 23, Yesterday - I picked up Sky from her school at around quarter to 1 but it rained so hard that we can't walk to the jeepney station.
So, Sky and I decided to have lunch at SM Sta. Mesa until the rain stop. We ate at Wendy's and then waited and waited and waited but the rain won't stop.

Later, that afternoon while going around the mall, we stopped by the cinema area and I started taking pictures of Sky with the movie posters and the standees. 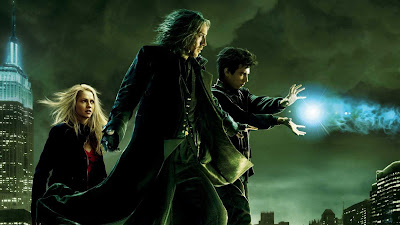 The movie showing that time was the latest Disney film called "The Sorcerer's Apprentice" which stars Nicolas Cage. According to movie critics, this was the 2nd Disney Flop this year following the "Prince of Persia" - showing us that movie goers would go for a good script rather than awesome special digital effects. But for me, I think the two movies are just okay. It's not their best works but it's not their worst either.

Ironically, the fall of "The Sorcerer's Apprentice" takes a new form that afternoon. Sky was posing on the standee when she accidentally leaned on it that it slowly fell to the tune of "Aaaaaaaaaaahhhhhhhhhhhh..." from all the people in the cinema area.

I was like, "Sorry... sorry" to the guard that helped me picked up the huge cardboard standee. And the guard was saying "it's ok sir.." smiling like this was some kind of a coffee break for him.

Luckily Sky was not hurt and no one was standing behind the standee when it fell.
Moments