WHAT DOES IT MEAN TO BE HUMAN? 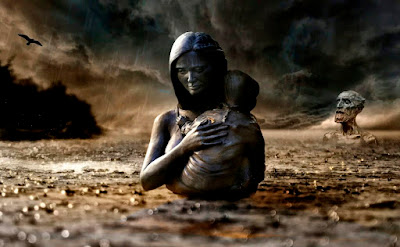 As I was designing a power point presentation about PCP-II (2nd Plenary Council of the Philippines), I stumbled upon a paragraph which struck me like a bolt of lightning. It said: Evangelizing means bringing the Good News into all the strata of humanity, and through its influence transforming humanity from within and making it new.
Now humanity is a vague word that might not necessarily mean the whole human species but rather its essence. Being human. We all have our darkness from within and sometimes that darkness over shadows that essence which we called 'humanity.'

This Sunday's Gospel reminds us of the last hour spent by Jesus while embracing that which made Him human. Facing death by the most gruesome and most embarrassing way possible. A sign was placed over his head which says "This is the King of the Jews." Mocked and humiliated until one man dying the same way as he was, defended him and entrusted his life to this crucified King.

Now, this act of punishment that Jesus received from the hands of people like you and me, could we, by our own reflection call this as humane? Drawing it from the context of being a human act of justice and therefore, part of our being human. Humanity?

'King' is also a human phrase and a human rank of power and glory. That is why when the word 'King' was branded to a man nailed on a cross and about to die- people see it as a big joke or even as an insult to the word.

There were a lot of contrasting events told in the Gospel today that which the paragraph from the PCP-II manual helped me realized.
Humanity is bigger than us, humans. It's larger than us and sometimes never us. When we do injustices, we lose our humanity. When we commit harm to other individuals, we lose our humanity. When we say bad things to other people, we lose our humanity. It is a contrast clearly seen in Golgotha where there suffers three crucified men and treated like animals - but we see those around them laughing and mocking as the real animals. This is so, because the very act of cruelty made by those who stands around them already rids them of their humanity.
A Kingly status is never about power and glory, it is about how others respect and believes in you. It is about the effortless influence you exert on people not because of what you wear, how rich you are or who you know but because of how you treat people, how you care for them and your sense of vision. Another contrasting event in the Golgotha scene. Jesus almost bare, powerless, wounded and dying was seen by one man as a savior. Someone who can deliver and protect him. A KING that he will follow to the end.
Evangelizing is to bring the good news to all the strata of humanity. The story and message of Christ received by all humans from within. A story of hope and salvation. I believe that whatever wrong things we do could never ever get rid of our humanity totally. There will always be a single drop of humanity left in all of us where we can draw upon strength to renew ourselves. That is why for those of us who have some strength to spare must do whatever we can to fuel those who have less. Your hope will inspire the hope of others. Your strength will be their strength. And the word of God flowing though you will flow through them. Jesus' teachings is not meant to turn us into Gods but it is meant to bring back our humanity and teach us to embrace it so that we may all live well.

Now why manifest the Lord's Kingly status during a time of suffering? Because I believe that the primary duty of a King is to protect his people. To love them. To fight for them. And if they will suffer, a king must suffer first to be able to save them.

Jesus died as a KING! The highest rank any man can bestow upon another man. And if we are to share in the Kingly vocation of Christ we must live by his example. Embrace our humanity and live by what it really stands for.

“As far as we can discern, the sole purpose of human existence is to kindle a light in the darkness of mere being.” - Carl Gustav Jung

Jesus is truly a KING! Not just among Jews but a king to all HUMANITY!
Thoughts