May 23 is a sad and eventful day here in the Philippines and perhaps all over the world. 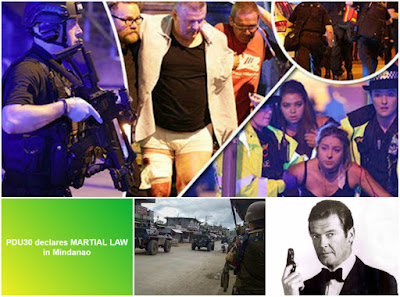 Tuesday begins with news of a terrorist bombing attack in Manchester Arena, England where Ariana Grande was having her Dangerous Woman World Tour Concert.

The attack left 22 dead and wounded more than a hundred, 59 of whom are still being treated in 8 different hospitals. According to reports, the bomb exploded moments after the concert at around 10:30pm, Monday (UK Time) or 5:30am, Tuesday here in the Philippines.

At around 2 in the afternoon, a firefight erupts at Barangay Basak Malutlut in Marawi City between AFP and PNP troops against the alleged Maute (Isis) group. Events on the ground are still sketchy and there have been a lot of conflicting news.

Meanwhile, at 10 in the evening Philippine President Duterte (who is in his state visit to Russia) declared Martial Law in Mindanao.

In other news, James Bond actor Sir Roger Moore dies of cancer at age 89 in Switzerland. Moore starred in seven Bond movies from the 70's to the 80's.


As for my own little corner in this crazy-by-the-minute world we lived in, I was at Salu Restaurant earlier this afternoon interviewing SLEEPLESS stars Glaiza De Castro and Dominic Roco. MORE about that story on www.raindeocampo.com