5 SIGNS TO LIVE BY

And the sign says "Long-haired freaky people need not apply"
So I put my hair up under my hat and I went in to ask him why
He said you look like a fine outstanding young man, I think you'll do
So I took off my hat, I said "Imagine that, huh, me working for you"

Signs, signs, everywhere there's signs
Fuckin' up the scenery, breakin' my mind
Do this, don't do that, can't you read the sign...

That was from a song way back in 2007 by a band called TESLA that talks about SIGNS! It was actually a revival from an even older band called Five Man Electrical Band who created the song in 1971.

Here's what the TESLA version sounds like:
Anyway, those were my kind of songs back in the early 90s - Posters of Tesla, Warrant, Skid Row and Motley Crew used to be all over my room's wall. Then Nirvana came, and I had to redo the whole set-up with a touch of Grunge.

That piece of personal history was brought to you by the song SIGNS, which is actually the main reason why I am writing this post.

Contrary to what the Tesla song is trying to imply, not all SIGNS are bad. Most of them are actually crucial for us humans as a society. Let's just say that WE ARE LOST without them.

And some SIGNS even go the extra mile by influencing our way of life. And I am here to talk to you about 5 SIGNS that has indeed made a lasting impression in mine.

NO ID NO ENTRY

This SIGN is on every institutions found here on the face of the planet.  It's like common sense already - if you have no proof of identity then people won't trust you to go inside their place. 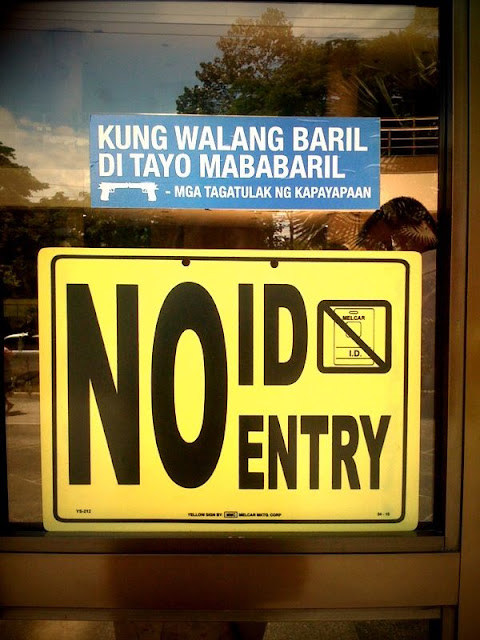 We learned in school early that our name and face on a piece of paper and plastic, can actually give you leverage on many things. Well for one you'll have access to almost everything plus you automatically become part of a community that wears the same kind of paper and plastic.

When you get older, you'll find that having an ID is also a necessity - for work, as a requirement for various applications and a way to get more IDs. That's why, the more IDs you have, the more privileged you become.

So that makes me an indigent, 'cause what I do have on my wallet right now is an almost expired Postal ID. :)

KEEP OFF THE GRASS

You get the hell out of the neighbors well trimmed Bermuda because you'll mess up the landscaping! 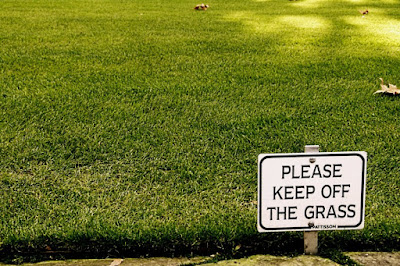 But there's more to this sign than just aesthetics! It teaches us also about respect! Respect for other people's property. Respect for Nature. Respect for Life (however small or insignificant it may be).

I came across this sign when I first started working. This was actually part of a Japanese Workplace Organization manual that promotes order and discipline in traffic (people or vehicle) in and outside of the work environment. 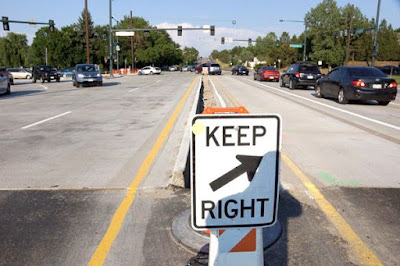 The idea is very simple - always keep to the right side of everything. For example, in staircases, when you follow this principle, people going up or going down will not have any problem because everyone's on the right side (a space to the left is always made available).

However, I am not so sure if LRT and MRT personnels have been introduced to 5S because some stations are actually violating this basic principle by directing passengers to go left instead of right when going up the first level of stairs and then you decide which way to go (left or right) when you get to 2nd or 3rd level - Pureza LRT station is one of them.

Not much of a big deal to some but it's quite confusing especially for a society that has been trained to Keep Right.

CLEAN AS YOU GO

This is an unusual sign, but one that is very important.

I used to work for a NGO and we have this canteen that has this sign posted on the wall. What this means is that dining customers will need to free or clean-up their table after eating. 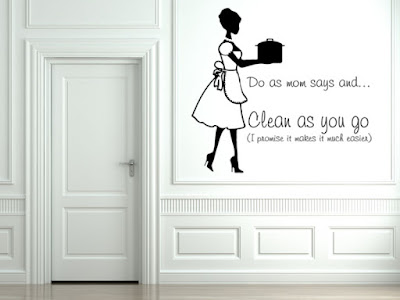 It's not because the concessionaire lacks the manpower to service its dining customers but it was more like a way for the organization to train its volunteers, workers and visitors the value of taking full responsibility for one's action and self-reliance as well.

Good values is always worth all the trouble! 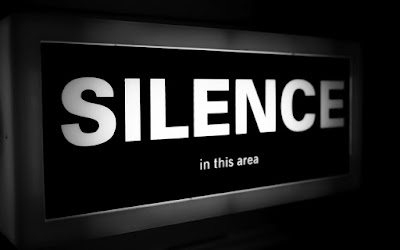 It's a sign that teaches us to respect the rights of other people.

But what it actually does is that it trains us to have more self-control. For many, a silencing activity would prove to be a difficult task but once we've mastered the art of being silent - we can now claim that we have full control of both mind and body.

This skill will be one of the most important tool that you can use to face life's many challenges.

Self-Control, Self-Reliance, Order, Respect and Identity. Just some of  the things that SIGNS have taught me over the years.

For all those who have questions about this post or this blog in general, please read the sign below: 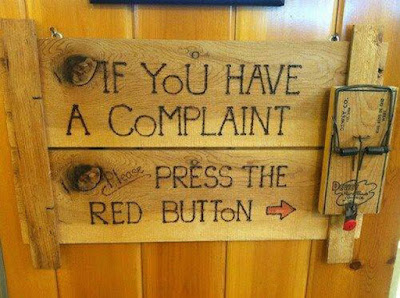 Email ThisBlogThis!Share to TwitterShare to FacebookShare to Pinterest
Labels: everyday signs, life, signs, signs to live by, way of life